Dealing With Drought in Haiti 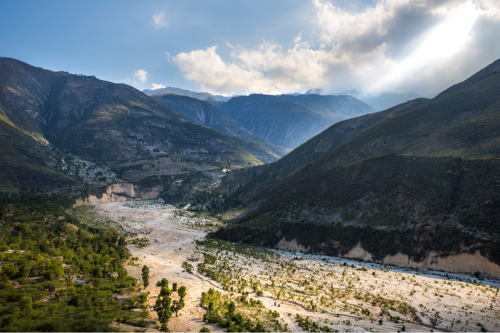 This week flooding and storms were again in the news as Fiji was struck by a devastating cyclone, destroying crops and communities and spurring calls for emergency humanitarian relief.

While emergency relief is important and needed, slower-moving disasters often pass unnoticed. This is most apparent in Haiti, where more than a year of persistent drought has lead to failing harvests and amounting hunger. The UN recently reported that more that 60 percent of Haiti’s spring harvest will fail this year, and that more than four million people will lack access to affordable and nutritious food.

For some areas of the country, the drought has been even worse, spanning over five years and resulting in the most severe food insecurity in the last thirty years. These highly impacted areas include virtually all of the communities in which Plant With Purpose works. As a result of the El Nino weather pattern the drought conditions are predicted to continue through 2016.

How is Plant With Purpose responding? As difficult as the current conditions are, they are yet another confirmation of Plant With Purpose’s strategy of helping farmers diversify their crops and sources of income, so that they are less vulnerable to droughts, floods, and other natural disasters. The cash savings that farmers accumulate in Village Savings and Loan Associations (VSLAs) serve as a vitally important safety net, enabling farmers accumulate the savings needed to buy food when they need to.

These savings groups also teach farmers skills that will help them maintain adequate food in low-water conditions, including raising rabbits, planting more drought-resistant crops, composting, and soil conservation. Tree planting is another important component in this strategy, as healthy watersheds are needed to avoid flooding and help capture water in the ground where it can feed the wells and rivers which people depend on. These strategies are paying off in Haiti, where farmers reported a 26 percent reduction in the time spent walking to get water for their families.

Finally, Plant With Purpose has made some program adjustments this year that will help farmers cope with future droughts, including increasing the number of family cisterns being built to provide water through times of drought. While we can’t control the weather we can anticipate times of drought and collaborate with farmers to help them prepare. We are grateful for the opportunity to serve alongside hard-working farmers, even as we pray for the drought to end.

Looking Back: Plant With Purpose’s founding in the aftermath of category 5 hurricane David

With hurricane Patricia in the news today, it occured to me to re-post this video, telling the story of Plant With Purpose’s founding in the aftermath of devastating hurricane David, which struck the Dominican Republic in 1979.

As Hurricane Patricia threatens to devastate the Pacific Coast of Mexico, I thought I’d revisit some of the lessons we have learned about helping rural communities prepare and protect their land from the inevitable storms that they face. Below is a current wind speed map showing hurricane Issac approaching Haiti. 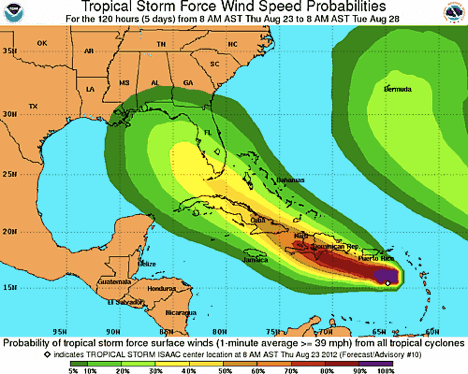 For us at Plant With Purpose, Patricia is a reminder of the extreme vulnerability of the tropical communities to severe flooding and landslides, such as those that occurred in the fall of 2008. In that season, four deadly hurricanes and tropical storms struck Haiti in a three-week period, killing over 1,000 people and leaving 100,000 homeless. After being hit by hurricanes “Fay, Ike, Gustav and Hanna,” families lost crops, homes, and thousands of animals—their food, shelter, and emergency savings. What we call a “natural disaster,” is in the case of Haiti sadly man-made, the result of Haitian farmers cutting wood to make the charcoal they sell in a desperate attempt to meet the needs of their families.

In the aftermath of the 2008 hurricanes, Plant With Purpose Haiti’s technical personnel and group leaders reacted promptly. Emergency programs were developed that would address the needs of the people, have a sustainable impact on the environment, and promote the economic development of beneficiaries.

Based on these goals, Plant With Purpose Haiti created an emergency plan and sought emergency funding. The objective was to rehabilitate the environment and also to reinforce the potential agricultural production for more than a thousand farmers organized in 50 community groups in six communes in the West and Southwest geographical regions. This program focused on three projects:

These projects made a tremendous difference in the lives of people who had lost everything. The animals restore their economic safety net, and the beans give them hope for the future, as they were able to plant their land and become self-sufficient again.  Building community resilience is vital. Farmers, who had lost hope in having sufficient seeds to plant, were able to make a new start.

Plant With Purpose was also able to accomplish significant watershed restoration work, installing 238,833 meters of anti-erosion barriers in 21 watersheds. These projects had the added benefit of creating 800 short-term jobs for local workers. (80% of the interventions were carried out in the central region of Plant With Purpose Haiti’s working area, and most of the laborers hired were members of Plant With Purpose community groups and had all been seriously affected by the hurricanes.)

Many individuals expressed their profound gratitude for Plant With Purpose’s work in their communities, and a deep desire to build on Plant With Purpose’s help to continue to improve their lives. One such person was Abbe Gilles Metiver, pictured below, leader of Larevwa community group. Abbe Gilles said, “Things from Plant With Purpose are full of blessings. The goat received got birth to 2 kids. I am going to keep one kid for myself and give a kid and the mother to two other members of the group.” 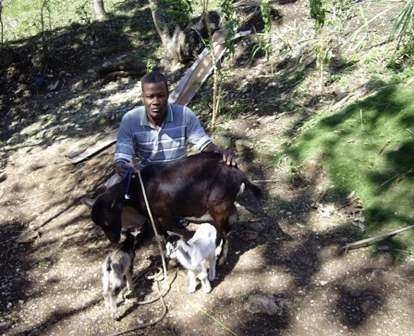 In the aftermath of the devastating earthquake that struck Haiti in 2010, Plant With Purpose built on the success of previous programs by instituting a Cash for Work program that employed over 2,500 people. Through this program over 400,000 trees were planted and 360 linear miles of soil conservation barriers were constructed on vulnerable, deforested hillsides.

This work was tested in 2012 when hurricane Sandy struck the Hispaniola. While the northern part of the island was largely unscathed, in the southeast an estimated 40% of the crops were lost, leading to deepening hunger and desperation. However, the rock walls and reforestation efforts dramatically reduced the damage in many communities where we worked. Over and over we heard people say, “Lives and farms were saved because of the preparation work that was done here. It was bad, but it could have been so much worse.”

While we are yet to see the extent of the damage that Patricia will cause, we know that reforestation and soil conservation makes a difference.

Plant With Purpose has partnered with IED-VITAL to train our Haitian and Dominican staff to run savings groups following the Village Savings and Loan Association (VSLA) model. They are celebrating 8 years of work in Colombia! This video is beautifully shot and captures the spirit of VSLA groups really well. If, like me, you don’t know much about Colombia, you may also notice the remarkable beauty and ethnic diversity of its coastal communities. This is in Spanish, but well worth watching even if you don’t understand the words.

I had the opportunity to visit Plant With Purpose’s Tanzania programs last January with the amazing videographer Shaun Boyte, who produced this video for us. It does a great job of portraying the positive impact that tree planting has on the lives of farmers and on the environment. We heard many farmers say that since they had been planting trees, rainfall had increased and the weather was cooler than in the past. This local deforestation has been strongly linked to the melting glaciers on Kilimanjaro. If the the local farmers’ efforts are multiplied, it seems very possible that the melting could be reversed.

Our good friends at Wings of Kilimanjaro (WOK) are starting up the mountain for a third round of paragliding and fundraising for Tanzanian charities. I had the privilege of joining them in 2013 and had a really fantastic time, summiting along with 95 others from more than 20 countries. In the process we raised over $600,000 for reforestation, water and education projects in Tanzania.

This year’s climb and flight will benefit WorldServe’s water projects, providing clean water to Masai communities in northern Tanzania. You can learn more about the project and donate here. Congratulations and best of luck to organizer Adrian McRae and everyone participating in WOK 2015!

Climbers and porters moving up the mountain 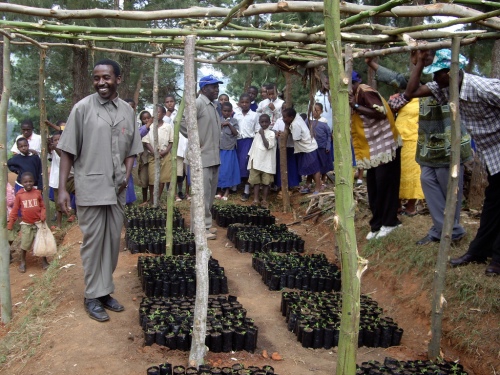 WOK 2013 supported tree nurseries like this one, at a local Tanzanian school, and helped us plant hundreds of thousands of trees

In my role at Plant With Purpose, I’ve had the opportunity to work very closely with a number of corporate partners who have very generously supported our work. (When I say “corporate” I have in mind here primarily family-owned business rather than publically traded companies.) We have had, and have, some incredible relationships with companies that have been a great blessing to our work, and a few that have been a bit more challenging. What makes for a healthy partnership between a charity and for-profit company? I’ve been thinking about that this week, and so with that in mind, here are my Six Keys to Healthy CSR Relationships: These relationships work great when there is…

This is the first time I’ve tried to write about this topic and I welcome your thoughts and feedback!

Burundi: The role of Savings Groups in the Midst of Crisis

Despite all the upheaval in Burundi, Plant With Purpose’s programs there continue to function much as before, with the exception of those closest to the capital, where the violence has been the worst. One thing that we are quite interested in understanding better is how the work we are doing in communities is helping people weather the current upheaval, helping them to continue to farm their land and to maintain trust in their communities. One statistic that we track very closely is the average weekly savings rate across the program. We currently have 6,500 families in 268 groups. The savings rate over the last six quarters is shown here:

What does the increase in savings rate mean? While it might reflect a measure of fearfulness and lack of opportuntity to invest money on things like crop inputs, hopefully it also reflects the deep level of trust amongst that VSLA groups help to foster. One would also hope that the trust fostered by these groups could also help prevent a deepening cycle of violence in Burundi.

My Dad’s Birthday greeting from Kilimanjaro

I’m about two years late in posting this, but it brought back some great memories:

A celebration of hope in Tanzania

I had the opportunity to visit Plant With Purpose’s program the Pare mountsins of Tanzania a few months ago to participate the third annual Village Savings and Loan (VSLA) Competition Celebration. The event was the culmination of a year long competition, where 125 VSLA groups competed in tree planting, adoption of organic farming methods such as composting and pest management.

Groups arriving for the celebration

We’re in the process of putting together a video of the celebration, but I thought I’d post a few pictures. It was a joyful and inspiring day, especially encouraging to hear farmers talk about how they were learning from each other, the impact on their farms, and their hopes to do even more in the coming year. (Photo credit to Shaun Boyte.)

Plant With Purpose’s team of agronomists, with prizes for the winners 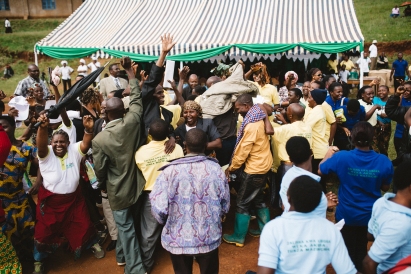